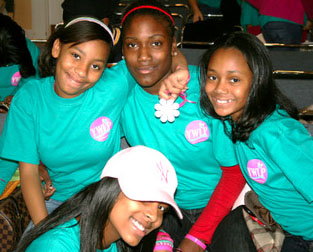 Related posts are available under Research and Community.

Nancy Deutsch has been Director of Research for the Young Women Leaders Program (YWLP) a combined group and one-on-one mentoring program for middle school girls, since 2004. She is interested in the contextual study of adolescents’ lives and identities.

In a recent paper on YWLP (Deutsch, Wiggins, Henneberger, & Lawrence), to be published in The Journal of Early Adolescence, she uses a mixed methods approach to examine group processes that contribute to mentees’ satisfaction with their one-and-one mentoring relationships and their mentoring groups. Interestingly, there were no differences between groups on girls’ reports of how satisfied they were with their experiences in their mentoring groups. However, there were significant differences between groups in girls’ reports of satisfaction with their one-on-one relationships. Groups in which girls were more highly satisfied with their one-on-one relationships were characterized by more positive social processes (e.g., caretaking, trust building, sharing). Groups in which girls were less satisfied with their one-on-one relationships were characterized by more negative social processes (e.g., disengagement, rejection). Both high and low satisfaction groups were characterized by high levels of connection. In particular, girls in low satisfaction groups often reached out to other mentors and mentees besides their own.

The high levels of connection and opportunities to reach out to people other than their own mentor may contribute to the YWLP’s high retention rate. Deutsch and colleagues’ findings are among the first to look in depth at group processes occurring within a large, school-based, combined group and one-on-one mentoring program for middle school girls.  Findings indicate that the addition of the group component to the one-on-one mentoring relationship may help to increase connection and improve retention when girls are dissatisfied with their one-on-one relationship with their mentor.

Deutsch is Associate Professor and Program Director for Methodology at Youth-Nex.