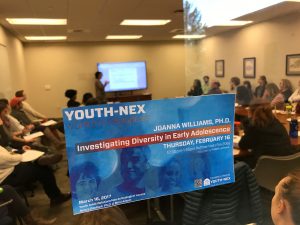 Above, Joanna Williams speaks to a standing room only crowd of colleagues and students, at the February Youth-Nex Works in Progress Meeting on “Investigating Diversity in Early Adolescence.” (Audio of the talk here.)

Williams is an associate professor at the Curry School of Education and is affiliated with Youth-Nex and Youth and Social Innovation (YSI).

In her recent blog for the William T. Grant Foundation, Joanna Williams asks if research matters in the real world. Published with the foundation’s consent here are her thoughts.

Does the work I’m doing in academia really matter? This is a question that university professors like me should ask ourselves periodically.

In 2014, I was funded by the William T. Grant Foundation Scholars Program to study the complexities of racial and ethnic diversity by examining peer social networks in middle schools. The Scholars award has enabled me to take a mixed-methods approach to documenting academic and psychosocial correlates of peer group diversity, and to dig further into the contours of youth’s daily experiences in diverse schools.

In the years since I received the award, of course, conversations about race have become increasingly central to our national discourse. The Black Lives Matter movement, for instance, has brought greater focus to issues of structural racism and state-sanctioned violence, and has motivated me to think hard and deep about how my work on diversity can respond to urgent issues of pervasive, institutionalized, and violent inequalities that play out daily across racial lines. I’ve wondered at times how and to what extent research like mine, which focuses on diversity, ultimately matters.

But recently, I have begun to ask myself a new question: How can I use my work on peer network diversity to promote racial and social justice? I’ve pushed myself to consider what it means to bring a social justice lens to my work, giving particular thought to three points of reflection:

1. Understanding where my research fits in the bigger picture

Secretary of Education John B. King, Jr. has made school diversity a priority since his confirmation nine months ago. King argues that, “diversity is not a nicety but a necessity… for all students… The transformative power of diversity in education is enormous.” Secretary King’s focus is primarily on what some have referred to as “first generation” or “first door” segregation, i.e., the racial segregation of school districts and/or buildings that is maintained by residential and economic segregation, and other state-sanctioned laws and practices. My own focus is on what happens inside the “second door”—specifically, how does racial/ethnic diversity manifest in students’ social relationships, and how does this inform students’ academic experiences?

Addressing these questions is a critical piece of a larger puzzle. For those districts actually working to create integrated schools, what might it look like to enact Secretary King’s vision of “boost[ing] empathy and reduc[ing] bias” and of “expos[ing] students to perspectives and ideas that enlarge their world views”? Genuine diversity involves respecting and understanding different ways of knowing, learning, and being. So how are schools with ethnically diverse student populations acknowledging traditionally marginalized perspectives? Listening to the voices of early adolescents in diverse schools—an integral part of my research—is essential to addressing these issues.

Reminding myself of the value of my research agenda helps, on some level, to propel me forward. But it still doesn’t quell the feeling that I should be doing more with my academic training to bring about measurable change. For this, I’ve had to push beyond my disciplinary comfort zone, realizing the limits of my training in a discipline (psychology) that typically focuses on individuals at the expense of systemic factors (Fine & Cross, 2016).

This past spring I attended a professional development training at the annual meeting of the American Educational Research Association, titled “Using Critical Race Theory in Secondary and Higher Education Research,” led by Terrell Strayhorn and Royel Johnson. Prior to this, I’d had minimal exposure to Critical Race Theory (CRT); beyond reading a few articles that had used a CRT lens as a frame, my knowledge was quite limited. What I learned from that session, though, has stuck with me. The take-home points that resound most are that CRT brings activist, scholar, and practitioner together to study and transform relationships among race, racism, and power. It moves beyond race as a variable or grouping mechanism, and focuses instead on how race operates in our lives.

As I began to seek more information about CRT, I found myself feeling like I’d just re-entered my first statistics class—“how will I ever learn, let alone apply, all of this?!” While I had been taught to “think critically,” I lacked understanding of critical race perspectives that recognize the endemic nature of racism and challenge notions of “race neutrality.” I knew that building this new critical muscle would be essential in moving my project forward, and I now find myself at a place where I can think about the elements of my project with a focus on “challenging racism [and] revealing cultural wealth” (Yosso, 2005).

3. Considering how my own position of power and privilege informs the research process

Here I give credit to three early career scholars whom I respect and admire tremendously: Elise Harris, Lisette DeSouza, and Mimi Arbeit. These scholars organized a powerful #BlackLivesMatter pre-conference at the 2016 Society for Research on Adolescence meeting, where they centered the voices of community activists who were on the front lines of social change with and for youth. They have since followed up with two blog posts on the SRA website. Most recently, Harris and Arbeit urged social scientists to “Know how racial power gets produced and reproduced within our field.”

Their demand for critical and reflexive thinking pushes me to consider my own position of power and privilege in relation to framing research questions, disseminating findings, and considering implications for practice. It’s forced me to reconsider the overly simplistic narrative that “racial and ethnic diversity is good” and to instead think about, in the context of middle school peer groups, how, why, for whom, and under what conditions this actually holds true. I’ve had to pause to consider what message it sends to suggest that “of course we should be promoting racially-integrated peer groups,” because the unstated implication is that racially-homogeneous peer groups, particularly for youth of color, are inherently bad.

In my preliminary work, I’ve found positive correlations for youth of color (relative to their peers in homogeneous groups) between peer group diversity and outcomes we consider to be beneficial (e.g., teacher ratings of academic and social competence). I’m pushing myself, however, to think critically about what this means. Does peer group diversity align with performance of dominant cultural norms for “acceptable” behavior in schools? If behavior in diverse peer groups conforms to a single accepted norm, is this really “diversity”?

When I was named a William T. Grant Scholar, the Foundation was focused primarily on funding research to build understanding of youth social settings. Since then, research on reducing inequality has become one of the Foundation’s two key research priorities. As it happens, I can see that reducing inequality has become an important part of my own research focus. In fact, I see understanding settings and reducing inequality as being intimately intertwined—inequalities manifest and are perpetuated, that is, in the context of particular settings. Although my “setting of interest” is the peer group in racially diverse middle schools, a critical perspective demands analysis of how practices that maintain academic inequalities, including deficit-oriented explanations of non-conforming behaviors (Carter, 2005), get reproduced in peer social networks. It also requires challenging the oversimplified notions of diversity that hinder progress towards equity in schools.

So, when I reflect now on how my academic work matters, and will matter, for the real world, I remind myself that by bringing racial justice to the work I’m already doing, I can make it matter.