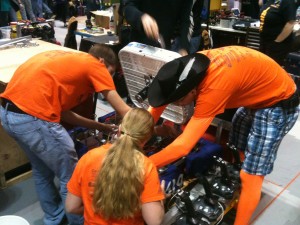 This team, repairing their robot between matches, received a “low dosage” of mentoring.

Dolenc’s research examines adult mentoring styles on high school robotics teams. He is looking at how mentors define their own involvement, and how students respond under their mentors’ defined involvement and approaches.

He is also considering an investigation about the implications that these mentor-student interactions have on the students’ long-term growth. This entry specifically addresses low-dosage mentoring.

Mentors play important roles in out-of-school-time (OST) science and engineering activities. They can dictate the learning atmosphere and create or remove barriers for student development in these more informal settings. There is a need for mentors to recognize their role in these activities and understand how their behavior impacts student development.

While adult mentors may use “high-dosage” or play a more active role in their mentoring, this blog addresses the impact of low dosage mentoring. Further entries may address the other end of the extreme, where we see a high dosage of mentoring and what impact this has on associated student behavior and student growth.

Mentors, and even teachers, have a proclivity for using the term “hands-off” when defining their low dosage of involvement during a desired student led activity. Upon further observation of such scenarios on OST robotics teams, we see mentors guiding, teaching basic skills, and ensuring that most, if not all of the students on the team, are involved in some aspect of designing and building the robot.

The context for this study:
An annual three-day robotics challenge brings together 60 or so teams of high school students who have created robots at their own sites over a six-week period. For each annual challenge, a new “game” with accompanying rules is played. Teams are comprised of 25-30 students and each team must include at least one adult mentor.

Recently, I observed one particular robotics team, the eight mentors clearly defined their own mentoring styles and boundaries. Their mentoring goals focused on students developing their own ideas and doing the work themselves to create the robot. To achieve these goals, mentors first taught students how to use the tools and machinery equipment available. Then, mentors took the role of project manager making sure the students were progressing in making the robot without eliminating opportunities for students to learn on their own. More specifically, mentors allowed students to make decisions on the robot strategy, design, and construction. Finally, their mentoring approach ensured all students were involved and contributing to the team’s progress of creating and fielding a robot at competitions.

Additionally on this particular team, mentors viewed student failures throughout their process of building the robot as opportunities for the students to learn. Despite the fact the students didn’t win on the field of play, this mentoring viewpoint exposed the students to learning more by doing, creating, and performing tasks on their own rather than by watching a professional engineer mentor perform the tasks.

The associated student behavior on this particular team showed student self-direction, they learned by doing, they learned through their own failures, and they learned by exploring their own ideas. This produced a learning environment in which students identified themselves with like-minded science and engineering  peers; had fun; worked toward a common goal; and they succeeded in grasping complex engineering content while navigating challenging social dynamics.

Self-directed students on this team moved through specific steps when completing tasks. They used a trial and error process when faced with a problem. They explored an initial solution, and if it failed, they would try another direction until they were satisfied with their result. As students continued to explore solutions to problems, they were developing creative thinking skills and building confidence in their ability to complete more challenging tasks.

More on the Picture Above: The team, competing in Richmond, VA, created a defensive design which featured a modified fan emitting a wind turbulence to throw their opponents shooting Frisbees off their mark.

Dolenc used a theoretical framework of self-directed learning for this study. Look for more blog entries by Dolenc on robots and mentoring here in the near future.

Dolenc co-teaches “Science for the Elementary Teacher”  at the University of Virginia. Prior to this, he taught at the secondary level in the Chicago Public School system. He received his teacher education at Northwestern University.