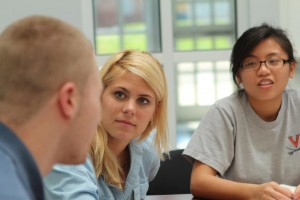 Guest contributor, Rob Wolman is the teaching assistant and primary research assistant for the Books Behind Bars / Awakening Youth Project. Rob is a Montessori teacher and corporate trainer.

Awakening Youth Through the Humanities is an interdisciplinary, mixed-methods study that seeks to understand the outcomes of a U.Va. course called Books Behind Bars: Life, Literature, and Leadership. In this course, undergraduates travel to a maximum security correctional facility to lead incarcerated youth in discussions and creative activities related to great works of Russian literature. The course brings college students and correctional center residents together in a community of learning that uses the power of literature to inform, transform, and build connections between people from widely diverse backgrounds. 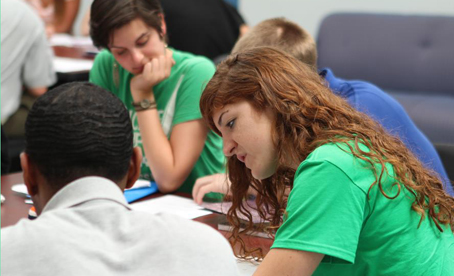 This study, the first-ever collaboration between Youth-Nex, CASTL-HE, and the U.Va Teaching Resource Center, has collected data over a three-year period that suggests the course provides a wide range of benefits for U.Va students. Recently the study gained approval to conduct interviews at the correctional center, allowing incarcerated residents to reveal, in their own words, the impact that the course is having on their lives.

Books Behind Bars aims to foster these residents’ academic, social, and personal growth and to help reintegrate these youth into society as productive citizens. The resident interviews indicate that the course appears to be achieving all of these goals.

The residents reported academic gains from both the study of unfamiliar subject matter and from the focus on literacy, with many describing a renewed or newfound love of reading. “When I get out,” said one resident, “I’m gonna get myself a bookshelf!”

They expressed surprise at having gained so much knowledge and insight from the study of Russian literature, a subject they initially found strange and unappealing. As a result, they demonstrated a more open attitude towards learning in general and a willingness to continue exploring unfamiliar topics. “Russian Literature?! This ain’t too much of what I’m into right here,” exclaimed one resident who then went on to say, “But after I started getting into it, I started to like it…it was the message behind it.”

“I learned that it ain’t always a bad thing to try new things,” said another resident, “…if I’d have went against my better judgment then I would have never got in the class. I would have never tried this because it’s not something that I ever had an interest in. So I would have just walked away from an experience that I really learned a lot from.”

Residents displayed a deep sense of accomplishment at having comprehended college-level material and participated in college-level discussions, and thus felt encouraged that they might succeed in a college environment. Consequently, virtually all of the residents interviewed showed increased interest in attending college, including one who had no interest in higher education when he started the course. He is now enrolled in college.

The interactive, “hands-on” approach of the course appealed to many residents, especially those who had negative experiences with school. This seemed to result in a high level of engagement in the course and increased openness to the educative process in general.

Residents also discussed how the course helped them develop social skills. They cultivated conversational abilities, sharing ideas and insights with people from different backgrounds and becoming better listeners, open to more varied points of view. During a court hearing, a resident in the course spoke about Russian literature with his judge for over an hour. Correctional center staff members believe this conversation played a major role in the reduction of this youth’s sentence. Course residents also had greater success with job interviews within their facility and were more self-assured about facing similar interviews once released.

Since good behavior is required for course participation, residents not only maintained excellent behavior during the run of the course but encouraged their peers to do so as well. Some residents reported better impulse control and more effective decision-making, not just due to the above-mentioned incentive but also as a result of life lessons learned through reading and discussing the literature. “That’s one skill I did get out of [the course],” said a resident, “is to think about stuff, to stop being so impulsive and just doing it and just sit back and think sometimes, like what would happen if I do such-and-such…It bettered my thought process.” Residents mentioned that these behavioral effects lasted even after the course was complete.

Residents also asserted an increased interest in civic engagement as a result of the course, desiring to “give back” to their home communities. “Before the project,” said one resident, “I didn’t really think I’d do anything with the community in ways of volunteering at places like parks or recreational centers or something like that. I didn’t think I could see myself doing that. But after Russian Literature, I see myself thinking about it more and more, me helping other people…helping my community.”

The final set of outcomes relate to the residents’ personal development. Having a venue in which they could freely demonstrate their intelligence and be acknowledged positively for being smart and insightful seemed to challenge the negative opinions they had about themselves. Residents relayed that the course allowed them to see things from different perspectives, and they appreciated having learned so much through exposure to a range of varied viewpoints.

Residents spoke often about how the opportunity to interact with peers had a major impact on their lives. They seemed to gain a sense of optimism from the presence of student role models and were inspired by the college students’ passion for education and their ambition to pursue positive life goals. They enjoyed the atmosphere of mutual acceptance and support which helped form a community of respect and trust, despite barriers of class and culture. “The students here, they sounded like they were serious about their life, and goin’ somewhere,” said one resident, “I don’t have no friends that are like that…it motivated me to just keep goin’ for my own good.”

Residents reported that grappling with the themes of Russian literature, with its focus on timeless human questions such as, “Why am I here?” and “How should I live?”, helped them examine and reevaluate their own lives, values, and behaviors and thus had a positive effect on their moral development. Said one resident, “[The course] helped me understand messages that people have been trying to relay to me for my whole life, but it would go in one ear and out the other. But when you actually break it down in the sense of a story, and you start putting it together, you really learn from it.”

But perhaps most striking were the residents’ accounts of how the course gave them a sense of freedom, making them feel “human” for the first time since being incarcerated. These feelings, hard to come by in prison, gave them a taste of effective interaction with the outside world, a taste that seemingly provided them with useful preparation for the transition to life beyond bars.

Thomas Jefferson viewed literacy as a force for transformation, a vital ingredient in the recipe for human liberation. This outlook is echoed in these quotes from the residents: “The whole Russian Literature Project, whenever I was in there, I didn’t feel like I was incarcerated.”  “It made me feel less like a criminal…we got to study something and do something productive…” “I felt more free in Russian Literature, free to speak my mind, free to talk…It got me used to communicating with people on a positive outlook, positive-based conversation…” “They gave us a chance to participate in something…It made us feel like we can, like we really were somebody…” “It made me feel like I’m still in the world, in school…[like] maybe one day I can go out there and be around college students in the free world.”

Wolman received his masters in Educational Psychology – Applied Developmental Science from The Curry School in 2011. He is developing and implementing a facilitation curriculum for The Curry School’s Multicultural Education Course for Facilitators and is also leading the Charlottesville Promise Neighborhood Youth Council, another Youth-Nex affiliated project.